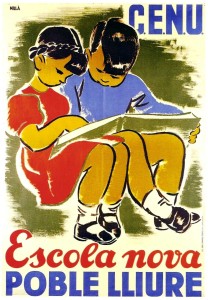 One of the revolutionary changes in Catalonia during the war, was the establishment of the CENU (Consell de l’Escola Nova Unificada) school board on 27 July 1936 which provided free, secular, mixed education for ALL, including to my knowledge the creation of the first free public nurseries in Spain.

We could do with going back to this universal system today, instead of the elitist public/semi-private/private modal which dominates today in Catalonia.