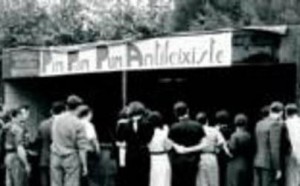 A shooting gallery in Plaça de la Universitat, Barcelona. 1936 named “Pim Pam Pum Antifeixista” (Anti-fascist bang-bang) in which participants got to shoot the insurgent generals. Profits went to the militias, including 97 pesetas on 13 October 1936 as you read here in La Vanguardia published the day after.