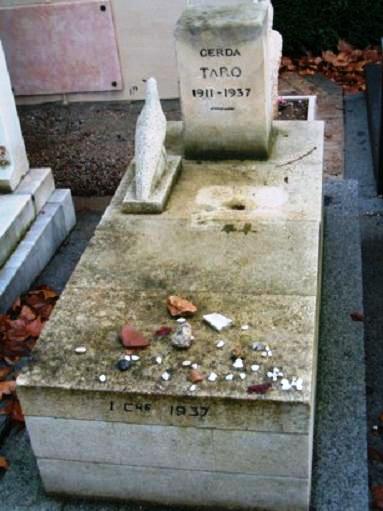 Spain and the lingering legacy of Franco – The Guardian
The fascist dictator’s shadow still hangs over Spain – but can this generation or the next finally bring catharsis to the nation?

The P.O.U.M. has been suppressed. Its paper and plant, all institutions and buildings seized. All occupants arrested. Most of the leaders including Nin have been jailed.

Every foreigner not a Stalinist is suspect and scores and scores have been arrested.

All prisoners are held incommunicado; a gigantic frame-up is being concocted. The charge: Criminal political conspiracy with the German and Italian fascists.

I’ve been running around like a hunted rat. Detectives have appeared at my hotel. Fortunately, the clerk speaks English and gave me warning. …

Was Gerda Taro murdered by Stalinists? This article in the New Statesman by Robin Stummer, based on an interview with Willie Brandt,  thinks so.

Gerda Taro was a fearless, pioneering chronicler of the Spanish Civil War. Robin Stummer uncovers evidence to suggest that her unflinching pictures led to her murder. Read

In an interview with the Spanish daily El País, a nephew of a Republican soldier at the Battle of Brunete explained that she had died in an accident. According to the eye-witness account, she had been run over by a reversing tank and she died from her wounds in El Goloso English hospital a few hours later. Wikipedia

Gerda Taro (19101937) was the first woman photojournalist to photograph in the heat of battle. Taro was the lover and photographic partner of famed photojournalist Robert Capa and, as his manager, is often credited for launching Capas career. She and Capa covered much of the Spanish Civil War side by side. Taro was killed in July 1937, while photographing a crucial battle near Madrid. ICP holds what is by far the worlds largest collection of Taros work, including approximately 200 prints as well as original negatives. Organized chronologically, this exhibition will include vintage and modern prints, and magazine layouts using Taros work. The exhibition will be accompanied by a catalogue, the first major collection of Taros work ever published.

Out of the Shadows: A Life of Gerda Taro (biography, I really want to read this soon)

“Gerda Taro was a fearless, pioneering chronicler of the Spanish Civil War… Taro was the first female war photographer. She created some of the most moving studies ever made of people in conflict.” –‘New Statesman’

In Barcelona last week opened a political trial so engrossing that even a major air raid, even, the shattering concussion of bombs which exploded a few hundred yards from the courtroom did not distract the judges, prisoners or spectators. In an atmosphere electric with hate and Spanish passion, Andrés Nin was at last put on trial in absentia. Andrés Nin’s small, blonde Russian wife or widow had a ringside spectator’s seat. Read more:

Gerda Taro photo collection on youtube with interesting soundtrack. Includes many rare photos taken by the partner of Robert Capa, many which are from the Spanish Civil War. Here

END_OF_DOCUMENT_TOKEN_TO_BE_REPLACED

An interesting talk here about the life of Gerda Taro, the pioneering and largely unknown female photojournalist whose work consisted almost exclusively of dramatic photographs from the Spanish Civil War.The talk is given by Irme Schaber, Taro’s biographer.

Taro was companion and professional partner of photographer Robert Capa.

When the Spanish Civil War broke out (1936), Gerda Taro travelled to Barcelona, Spain, to cover the events with Capa. Taro acquired the nickname of la pequeña rubia (“the little blonde”). They covered the war together at northeastern Aragon and at the southern Cordoba. Always together under the common, bogus signature of Robert Capa, they were successful through many important publications (the Swiss Züricher Illustrierte, the French Vu). Their early war photos are distinguishable since Taro used a Rollei camera which rendered squared photographs while Capa produced rectangular Leica pictures. However, for some time in 1937 they produced similar 135 film pictures together under the label of Capa&Taro.

Subsequently, Taro attained some independence. She refused Capa’s marriage proposal. Also, she became publicly related to the circle of anti fascist European intellectuals (Ernest Hemingway, George Orwell) who crusaded particularly for the Spanish Republic. The Ce Soir, a leftist newspaper of France, signed her for publishing Taro’s works only. Then, she began to commercialize her production under the Photo Taro label. Regards, Life, Illustrated London News and Volks-Illustrierte were amongst those publications.[1][2]

Reporting the Valencia bombing alone, Gerda Taro attained the photographs which are her most celebrated. Also, in July 1937, Taro’s photographs were in demand by the international press when, alone, she was covering the Brunete region near Madrid for Ce Soir. Although the Nationalist propaganda claimed that the region was under its control, the Republican forces had in fact forced that faction out. Taro’s camera was the only testimony of the actual situation

END_OF_DOCUMENT_TOKEN_TO_BE_REPLACED Cinergia has this excellent selection of information on films about the  Spanish Civil War for teachers, scholars and cinephiles. Most of the films listed are feature films, but some documentaries are included. More here

The site also has comprehensive notes in English and Spanish on using some of these films for teaching. Here