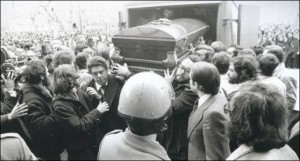 Spain’s so-called peaceful model Transition between 1975 and 1983 resulted in 591 deaths at the hands of extreme left and right terrorist groups but also including no less than 188 by the Institutions of the State. Photo is of the funeral of communist labour lawyers killed in 1977 in a neo-fascist terrorist attack at Atocha, Madrid. Article here is entitled “The Transition was a Fairy Tale“